Mary Kerrie Davis had smoked cigarettes for most of her adult life, when she embraced vaping as a way to quit.

For several years, the 52-year-old mother from Georgia vaped only nicotine. But after trying THC cartridges, she began to experience health problems. On September 6, she died.
Mary Kerrie’s case sounds like the nearly 1,900 cases of vaping-related injury confirmed by the US Centers for Disease Control and Prevention. As of this week, the outbreak has led to 37 vaping-related deaths in 24 states, the District of Columbia and the US Virgin Islands.
Many of those cases and deaths were among people who vaped THC, the psychoactive component of marijuana.
“The data do continue to point towards THC-containing products,” Dr. Anne Schuchat, CDC’s principal deputy director, told reporters in October. “But I’d like to stress that we don’t know what the risky material or substance is. THC may be a marker for a way that cartridges were prepared or way that the devices are producing harm.”
Mary Kerrie’s death hasn’t yet been counted in the CDC’s total. Her grieving family has many questions still without answers. But they believe that vaping THC is what ultimately led to her death.

From smoking to vaping

When Mary Kerrie transitioned to vaping nicotine a few years ago, she stopped smoking cigarettes completely, her daughter, Maggie Davis, said. Mary Kerrie was adamant with family and friends that vaping was healthier than smoking.
“She thought it was safer,” her husband, Kevin Davis, said. “I certainly liked the fact that there wasn’t the cigarette smell and her breath didn’t smell like cigarettes. I kind of thought it was better, too.”
Maggie remembers that her mom came toCalifornia this summer to help her move into her dorm for her senior year of college. While there, Mary Kerrie went to a vape shop and purchased THC cartridges for the first time.
Deaths linked to vaping often involved THC products, not nicotine, CDC says
Immediately upon returning home, she developed a nagging cough. Kevin didn’t know Mary Kerrie had been vaping THC cartridges. Only after her death did the Davis family learn that Mary Kerrie had continued buying and using THC cartridges in Georgia. Unlike in California, THC is illegal in the Davis’ home state.

‘I hope you don’t have that vaping disease’

Mary Kerrie experienced a steady decline in health between the time she started vaping THC cartridges and her death. The initial health effects she had experienced from vaping to quit smoking transitioned into frequent nausea, vomiting, diarrhea and a terrible cough. They’re all among the reported symptoms of vaping-related lung disease. 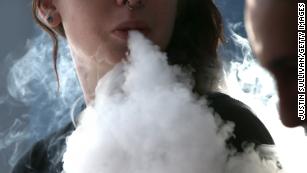 New vaping study links e-liquids to some lung inflammation
Mary Kerrie went to the hospital for assessment on September 4. A flu swab tested negative. She texted her daughter that she wasdiagnosed with pneumonia.
Maggie had just begun hearing reports of a national outbreak of a mystery illness related to vaping. She texted her mom, “I hope you don’t have that vaping disease.”
On the way home from the hospital, groaning between coughs, Mary Kerrie said, “I’m never smoking again. I’m throwing out all of my e-cigarettes and weed pens,” Maggie wrote in a personal essay for her college newspaper.
Kevin, an OB/GYN, encouraged Mary Kerrie when she declared she was quitting it all.
Still, Mary Kerrie’s symptoms became worse over the next two days. She stayed home from social gatherings, telling her husband that she just needed rest.
He felt she should be seen again by a doctor.
Days later, on September 6, Mary Kerrie was still sick. It was Kevin who found her, lips blue and gasping for breath, whispering, “help.”
On the way to the hospital again, Mary Kerrie’s pulse was barely detectable. She’d become unresponsive.
At the hospital, doctors performed CPR unsuccessfully.
Moments later, Mary Kerrie — an outgoing 52-year-old who loved rollerskating and mountain biking, a mother and wife who was known for being vivacious and happy — was gone.
“She will never see her youngest daughter graduate high school, nor her oldest graduate college,” Maggie wrote after her death. “She will never see her daughters married or meet her grandchildren. Her absence, a sudden and jarring hole in my family, will be felt for decades to come.”
In X-rays on the day Mary Kerrie presented at the hospital, her lungs had looked clear. Two days later, they revealed a white substance resembling clouds infiltrating Mary Kerrie’s lungs.

‘From healthy to drowning in your own lungs’

To the Davis family, the X-rays seemed to confirm what they had heard in the news: Mary Kerrie’s illness wasn’t simply a case of pneumonia. In addition to nausea, vomiting, diarrhea, coughing, shortness of breath and chest pain, the whiteout in her lungs was one of the symptoms of vaping-related lung disease.
“This wasn’t a nursing home patient. This wasn’t somebody with a chronic illness,” Kevin said. “You don’t just go from healthy to drowning in your own lungs and a flatline EKG from things in your daily life.”
Nearly two months after Mary Kerrie’s death, her case is still not part of the official CDC count of vaping-related lung injury deaths.
In part, it speaks to just how new of a phenomenon this is. The ongoing investigation “may take a few months” and could yield “multiple causes and potentially more than one root cause,” CDC’s Schuchat told reporters early in October.
For the Davis family, the wait has been frustrating. To them, it seems obvious that Mary Kerrie’s death is related to vaping.
Kevin said he recently spoke with a CDC official who said that his wife’s case met the agency’s definition of a vaping-related illness, but the agency is waiting for the county medical examiner’s decision before making an announcement.
There have already been three confirmed vaping-related deaths in Georgia. If and when it isannounced, Mary Kerrie’s death could be the fourth, potentially making Georgia’s death count the highest in the United States.

The Davis family and Mary Kerrie’s friends want her to be remembered for the good she brought into their lives. 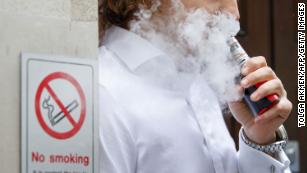 FDA faces mounting pressure to release final e-cigarette flavor policy
“She was all in on me and all in on our daughters, all in on her family. Anything that she wanted to be a part of, it was everything for her,” Kevin said of their 24-year marriage. “Her energyis beautiful, and I sure miss her.”
The Davis family attributes part of the blame for Mary Kerrie’s death to a lack of regulation by the US Food and Drug Administration.
“Marijuana pens also boast exponentially higher numbers of THC, and yet we still do not know how this historically disproportionate consumption of marijuana affects the human body, particularly when consumed as an oil,” Maggie wrote.
Earlier this month, the FDA warned consumers to stop using THC vaping products as investigations into vaping-related lung injuries and deaths continue. Last week, the CDC made a similar warning, saying “CDC recommends that you should not use e-cigarette, or vaping, products that contain THC.”
“Mary Kerrie vaped [nicotine] products for several years I would say, successfully, and did quit smoking,” Kevin said. “I think when she was exposed to legal THC in California and then got illicit THC in Georgia … I think that’s what killed her.”

The Next Frontier in Alzheimer’s Research